Fear is a mind-blowing entity that has the power to derail or promote progress. It has the potential to take you on a journey, but it’s up to you whether that path is one that you learn from or succumb to. I believe it’s all about the relationship that you build with fear and how you come to work with it or against it. I don’t believe you can or should eliminate fear from life; instead, fear is a motivator that reminds you that you are alive.
I like to think that I was born fearful, terrified of what could be. An odd thing to say given that fear often gets a bad rap, but I’ve been fearful all my life. As a kid, I can remember crying for hours, terrified that while my dad traveled for work, he would have some sort of accident and die. Gone would be what I considered to be my greatest source of happiness: our walks, runs, bike rides or explorations through the woods. Coupled with the daily terror I experienced at the hands of the person who was meant to protect me from harm, fear consumed most of my wakeful moments and developed a face. Like me, she was a young girl, but with a smile too big for her face. In the depths of her eyes, I could see hate and anger. With her hands, she had the power to inflict unimaginable pain.

As a teen, I became afraid of life itself. Doctors told me that due to my Rheumatoid Arthritis, I would be confined to a wheelchair by the age of 18, and I would have to give up all the contact sports I had grown to love. Boxing, jujitsu, pankration, rugby, hiking, and working out; sports that had made me feel powerful and like I could finally protect myself. Essentially, I was told that my life as I knew it was over and any goals or aspirations I had should be put to the side. My fear morphed into a teenage shit disturber who whispered notions of not being good enough and never being loved in my ear.

As a young adult, I was terrified of the world we lived in and the things going on around it, which evolved into the fear of never having the opportunity to see everything life and the world had to offer. Having ignored the doctors and continued with life as I decided it should be lived, I now had dreams of traveling, heading out on my own and discovering new trails and different ways of life while chronicling them in a journal. I wanted to write articles about other ways of living, the truth from countries we never really think about that I would one day sell to a magazine. As I looked at the world I wanted to write about, I saw again pain, destruction, selfishness, and greed. I saw people who wanted more than the abundance they already had and destroyed those in their path to get it. Animals being abused, forests cut down… It didn’t make any sense. Instead of progress, which is what I expected given how long humans have lived and evolved, I saw the opposite. Although people told me I was focusing on the negative side of life, I like to think I saw the realistic views. I was seeing life as it was presented, plain and simple. My fear, who at this point I “affectionately” called Franchesca Rose, again morphed and began highlighting all the reasons why it would be better for me to hide out at home. To obtain a comfortable job, not have friends or family and instead lock myself away from anything that could harm me. I have to admit, the temptation was great. 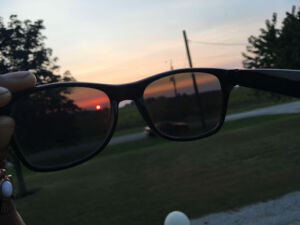 Today I’m a woman in her mid-30s navigating life with a completely different set of glasses that showcase the world very differently from the way I saw it growing up. In my late 20s, the thing I was most afraid of about Franchesca Rose was how she made me view change. This was a major issue since life is always in a constant state of change or migration. It wasn’t until I woke up one morning, drained of energy that I finally gave my head a shake. I remember thinking, ‘what the hell am I doing? This isn’t me. I’m not the girl who lets her issues consume her life and take over her journey.’

As I worked through my day, I realized I wasn’t living; I was just going through the motions. I wasn’t happy with what I was doing or where I was going. I decided to head out into the place where fear never followed; the forest. As soon as I entered the woods, I felt my chest get a bit lighter as though I could finally take a deep breath of air, fill my lungs and completely clear my head. It sounds odd, but it’s almost as if being out, a part of nature, keeps me grounded, and I can think without constraints. It’s the place where I can make some of my best decisions. As I walked, I allowed my mind to wander, to explore the hows and whys of who I was and where I wanted to go. Walking, lost in bliss, I looked up, and I swear I saw Franchesca Rose on the path invading my sanctuary. I recoiled from her too-big smile, eyes that were endless caves of negativity and from the whispers escaping her lips meant to tie me down and force me to become immobile.

I stood there for what felt like hours and just stared at her. I blinked, rubbed my eyes and looked around for someone to verify what I was looking at was real. To tell you the truth, every muscle in my body told me to run, turn tail and book it as fast as I could back to my car. Instead, I thought about how I had run my entire life, how I had been terrified of this woman now standing in front of me for over 20 years. I took a step forward and saw her smile shift. I took another, and I could feel her desire to take one backwards. I took another and another until I was an arm’s reach away, staring her in the face. Her smile wasn’t too big; it was normal-sized but actually a frown. Her dark skin was drawn, tired and lined by wrinkles, aging her before her time. Her eyes weren’t filled with the pain and despair that I had first thought but instead were bowls of lost hope and uncertainty. Her hair that looked black was actually a dark blue straw-like afro, unkept and broken. As I inched closer and reached out my arms, I’m not sure who was more afraid at that moment- my fear or myself. I pulled her close and gave her the hug I myself had yearned for. I felt as she breathed deep and released all the tension from her body. I felt her feelings subside and after several moments, her slim arms wrapped around my body.

Stepping back, I looked at her once again and saw myself, only different. One eye was bright purple, the other black, each filled with different emotions and desires, some good and some bad. Her hair fell down her back in locs, and her once too thin body had filled out to match my own. She still had those wrinkles, but her face was healthier, fuller and not so tired. She had shed years of holding too tight and let go of the need to be perfect.

The biggest change was in her energy. I didn’t want to run, I didn’t want to hide; instead, she invited me to just travel with her. My fear was both positive and negative; she was life. She had the power to derail or motivate, depending on how I treated her. Closing my eyes, I welcomed her inside, and I continued on my walk, my friend residing within my heart.

Franchesca Rose, my fear, had become my best friend and biggest supporter.